NiSi Interview With Joshua Snow – MY WORK IS MY BIGGEST ASSET

Joshua Snow is a fine art landscape and night photographer based in Moab, Utah. In 2016 he moved from upstate New York to Utah and left this mechanical engineering career to pursue photography and education full time. Now he spends a lot of his time traveling in his hand-built van, searching for compelling and intriguing images. Joshua may be a great example of what is possible. NiSi is glad to have this chance to interview him about his experiences and his work.

Z for Zoe and J for Joshua

Z: Hi Joshua! Thanks for being with us here! Firstly, could you share us a bit about yourself?

J: My name is Joshua Snow. I am a full-time artist and educator based in the desert Southwestern U.S. My approach to fine-art photography stems from my love for painting and the works of some 19th-century painters. I spend a lot of my time now travelling in the van I converted to an RV and mobile home/office, teaching workshops in various locals and exploring as much as I can. Z: How long have you been taking pictures? Do you still remember the moment you knew that photography was something you just had to do?

J: Growing up my interests were collecting insects, fishing and trying to fit in. Photography was never in my dreams, or goals. I’ve never thought that far ahead, living life one day at a time awaiting the next challenge or stimuli. It was insects, then the art of billiards, then sport fishing, then fitness, and in between the bug for photography bit me. Back in 2013, during a time when I was writing for a fishing magazine, I discovered photography, it was a way to illustrate the tedious details of articles. The craft of angling. Soon thereafter in the spring with the help of my girlfriend I began the intense journey of losing nearly 200lbs. We began hiking and visiting some of stunning waterfalls in the Finger Lakes. It was then, that spring of 2013 that I found what I was meant to do with my life. Since then I have never stopped chasing the light, learning and striving to improve. Z: Were there any challenges for you to switch from other jobs to being a photographer?

J: In 2015 while shooting in Acadia National Park in Maine, I had an epiphany. Maine is a stunning place, in fact as I write this I am preparing for my return trip there to teach a group and reminisce a bit. It was during that trip that I realized I wanted to take my interest and passion for photography to the next level. I wanted to share the information I was accumulating, gathering and learning with others, even though I had only been pursuing photography for 3 years I felt that my intense dedication and abilities to learn had given enough to share. It was after a visit to Arches, Canyonlands and Zion National Parks in May of 2016 that sparked the itch to leave my day job in New York as a then Manufacturing Engineer overseeing the production of trains and railcars and move to Moab, Utah. The small yet bustling tourist town in the middle of nothing gave me access to stunning landscapes which inspired me in an indescribable way. At that time I had been growing my business steadily while holding down my day job of sometimes more than 40+ hours a week. Boking portrait shoots and selling inexpensive prints, peddling my work to coffee shops and shared galleries with very little success. My heart simply wasn’t in portraits and print sales, it was deflating. Instead of letting it defeat me, I persisted and continued working toward improving my work, I thought that if I was to be successful as an artist and teacher my work would have to be unique, refined and without reproach. I still believe this today, and my work is what I rely on to allow me to continue teaching and creating, not my abilities as a business person. After only a year of living in Moab I had become so overwhelmed with private workshop clients wanting to experience the desert, teaching larger groups once or twice a month and building my portfolio that I was forced to leave my job. The transition felt seamless, one day employed, the next self-employed. Without a business background I’ve somehow managed to build, shape and grow this business while keeping it manageable and honest. I am so lucky that I get to do this and keep it about the love of sharing knowledge and cultivating it in others. So the short answer to your question is really “no”, other than allowing social media and the influence of others to slow me down. Once I learned to see past that and focus on my work things have only gotten better, and easier allowing more freedom for creating and an improved experience for students! Z: Your hand-built van is really cool! What is your workflow like when you travel and shoot?

J: Thank you! It was a labor of love, I think. Although my brain seems to struggle with switching back and forth between mechanical thinking and creative thinking it was quite fun. Most of the work was designed with a pencil and a scrap of paper and there are things I’d like to improve on, but I have spent nearly 6 months and 20,000 miles in it this year through single-digit temperatures to triple-digit temperatures, through sand, over mountain passes and more bumpy roads I care to remember and it hasn’t failed or fallen apart. Success, I guess! This past winter was fairly difficult for me creatively, after a slew of traumatizing experiences, close friends’ deaths and other things I was struggling to pick up the camera or even conceptualize an image. In between buying the van in January and travelling a bit to Iceland and South America in February and April I managed to spend enough consecutive 15-17-hour workdays on the van to complete it, enough to set sail for its maiden voyage. A six-week, 5,000-mile journey through Nevada, California, Oregon, Washington and back to California. Initially my workflow was travelling to a location, scouting it, camping as nearby as possible in the van, and shooting it at the best light and spending as much time there as possible followed by importing my images, and maybe processing one. I learned very quickly though that without a full-fledged editing station complete with my large Wacom and monitor I would never fully be able to properly finish an image. I’ve waffled on whether or not to revamp and install a monitor but Its been nice just taking photos and reflecting on them for a bit, saving them for when I am home in a more homogenous and calming space. Sometimes being on the road is hectic and in that state I prefer not to process images. 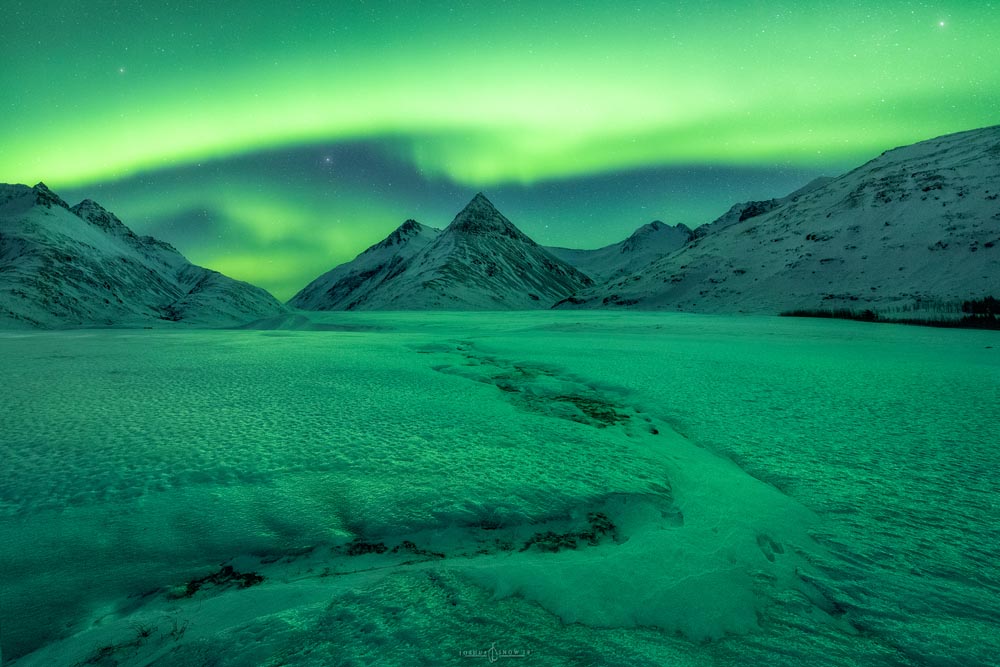 Z: Would you share your most impressive experiences, photographically?

J: There are a few images that come to mind if I were to be asked what images define me, and coincidentally those images depict a moment or experience that left me in awe. I’ve photographed wild mountain goats in Montana during one of the most amazing displays of light I’ve ever witnessed, captured lightning during a fiery sunset over an incredible desert canyon, the aurora borealis dancing over volcanic mountains, lava flowing like a river to the ocean and clouds eating goliath mountains. These experiences inspire me immensely, but also make it more and more difficult to out-do, not every scene is “EPIC”, but that doesn’t mean its not worthy of being captured. So I have been trying to shift my mindset to think about each scene as its own, with its own worthiness and not comparing it with other images or experiences, it helped me see again! Z: When did you start using NiSi filters and why?

J: In 2013 when I first purchased the Nikon 14-24 there weren’t a lot of filter companies making a holder with filters for that lens. The ones that did exist were bulky and cumbersome to use but NiSi’s original design was simple and effective. Easy to remove and install quickly. It wasn’t long before the filters helped improve my work. In 2014 I was approached by NiSi and the U.S distributor to become an ambassador and for permission to use my images taken with NiSi products for marketing material. It was my first chance to get my work out there and I have been faithfully using the filters and holders ever since and recommending them to others. Z: Which NiSi products do you usually use in your work?

J: There are 2 filters I never leave home or the van without. The 3-stop Soft Grad ND and the circular polarizer. Between these two filters they allow me to capture any scene while keeping my kit light. The 3 and 6 stop ND filters can be found in there as well when I am not worried about the weight or bulk of my gear.

Z: Among all the photos you took with NiSi filters, which one is your favorite? What went into creating it?

J: One of my favorite images was taken during an incredible clearing of cloud inversion in front of the tallest peak in the contiguous United States, Mount Whitney this past January while scouting one of my favorite areas in California with some good friends. The entire experience was special, not just the clouds and light. We had just returned from an 8-day, 5,000-mile round trip home to see the families in New York and 2 days later left for the west coast. When I arrived late in the night the entire Eastern Sierra range was socked in for miles with thick cloud inversion. It would be 2 full days before they’d clear and when they did it was magical. Armed with my grad filter and gear I captured portions of the finished image with 2 lenses and 3 focal lengths. My vision was to create an image that really showcased the amazing geology, flora and weather this area is known for while combating the visual effects of how lenses and cameras capture a scene versus our eyes. The image was captured with 9 photos, 7 for the focus of the foreground taken at 14mm, one for the midground at 24mm, and one for the mountains at 120mm. The grad prevented me from needing to waste any more time having to take even more images for highlight recovery in this very quickly changing and dynamic moment. Z: Is there any trend in photography now that inspires or disturbs you? Any general tips for other landscape photographers?

J: There are many things about the industry that disturb me, but not many that inspire me. There is such a rift in landscape photography right now between the purists and fine artists, the naturalists and the influencers of social media. Even within the rift there are rifts, and I am finding that simply keeping to myself, working hard and finding people that support and balance me is most important. My work is my biggest asset, as long as I can keep it honest and avoid the self-inflation, ego virus that has spread, I am happy! When the industry implosion dust settles, hopefully I’ll still be here creating and teaching! Z: What kind of photography plans do you have for the months to come?

J: Honestly, I am looking forward to some downtime this winter to catch up on thoughts, images, and writing, but I have so much planning and prepping to do for next year, as well as closing out this one. The winter as always will somehow end up being my busiest time of year. For next year though I am hopefully returning to Patagonia and Iceland while adding in a couple more, and new adventures in faraway places!